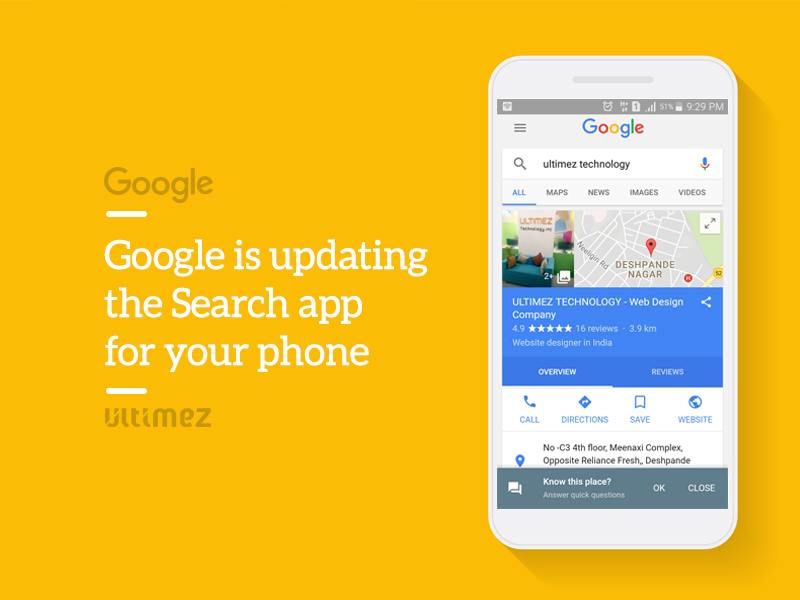 Google wants that its mobile application must be like a vehicle which will retrieve answers to all the questions. It is going to update the Feed section so that users get easier access to the information. These Feeds will include what trends are going on in and around your area and also around the world.

Google App has now come with a solution to all the Mobile users that it is going to automatically update feeds such as News, Birthday Reminders, Score and Weather. It will also give suggestions for your maps as per the location.

A new button will appear for some of the specific topics along with the search results.  These topics will also be along some sports area, television shows or musical bands

Now Google has installed some new features in its App on Android as well as iOS so that users find it more and more relevant. Some features were already being present in the app and some have been added up recently.

It includes an area where it is just as the card interface where the users can link their calendar and email accounts so that they get to know what is next on their schedule.

Google also aims to put the interest sections in the front and in the center which will help in increasing user’s interaction with the content.

Question and answer section is being added because if a user is searching for a recipe then the Q&A session will pop up with questions asked by other users about the recipe you asked along with answers given by the chefs. If you find that answer helpful then you can give it a thumb upvote and it will show a high vote to other users. In case you have other queries you can ask in Q&A section and wait for an answer from other users.

Google has also taken an initiative to a wider population of India as it has added regional languages option in its apps such as Google search, G board. Recently Google added nine more languages in addition to Hindi to the voice commands. Now the users can also give voice commands in Urdu, Punjabi, Oriya, Kannada, Tamil, Marathi, Bengali and Telugu.

Google has also added an offline mode in the Chrome browser. Now the users can save a webpage on the Google search app just by tapping on the arrow icon which is available on the menu page. The content which the users will save will be downloaded and it will be made available on the Chrome Browser itself. Google also remembers the searches made by the users when they are offline and will send a notification when the users connect to the phone again and the article can be accessed.

This new feature in Google adds shortcut buttons based on the user’s preferences and the popular categories on the home page .It should include sports, Movie trailers, transport, nearby attractions, flights, hotels etc.

In its updates, the app also updates the maps so that the users can easily find places. If a user wants grocery, then the app will show all the grocery stores nearby which will save time.

Other Hottest updates of Google:

GETTING GOOGLE NEWS WITH GOOGLE KEYBOARD

With the Google app, Chrome has also made extensions which will make online shoppers save their time, money and also the amount of internet bandwidth. This extension includes Tap and buys which will help buyers to get best possible online deals. It will also help the fashion lovers to get similar looking clothes, shoes, and fashion accessories from the images on a webpage.

The new and latest updates in Google app will not only save time for the users but also get easy access to their search. The users will find the information more relevant too.