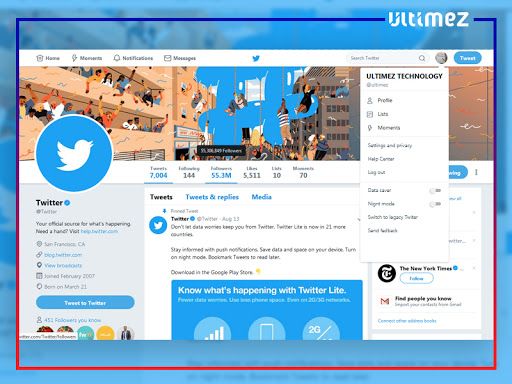 Twitter is the place for trending updates and lost of information across the globe. However, there are several barriers while using the platform like slow internet, low space in the device and many more. Taking these factors into consideration the company is redesigning the Twitter desktop version

The company is  currently testing a redesigned version for desktop, which will bring some new additional features.

Let’s see what new features Twitter has come up for its users.

Love to use Bookmarks and want it on web? Into scrolling through Explore to see what's happening?

We are testing out a new Twitter for web, which a small number of people will see today. Love it? Missing something? Reply and tell us. Don't have the new experience? Stay tuned. pic.twitter.com/w4TiRrVFHU

Twitter is updating ‘Explore’ and ‘Bookmarks’ features to the desktop version, which were previously exclusive only to its mobile app. Apart from this, you can also find night mode and data saver mode enabled with a toggle switch.

The data saver mode enables less consumption of data. Another tiny change is that the ‘Trends’ section has been located to the right-hand side of the page.

However, the new design feels less congested, but it shows less information in the same amount of space as before. This means you’ll have to scroll more than before.

At present, the updated version is only available for limited users. Twitter hasn’t confirmed when newly redesigned version will roll out to all users.

Sometimes you just want to talk, without being on camera. We’re launching audio-only broadcasting, so your followers can hear, but not see you.

Rolling out now for iOS. pic.twitter.com/tBsm37NcdH

In addition to the new web design, Twitter to soon release audio-only live broadcasts. But, currently, this update is only for iOS version.

Hope you enjoy the redesigned version once it is live. Be connected for more trending and interesting updates on your favorite social media platform.